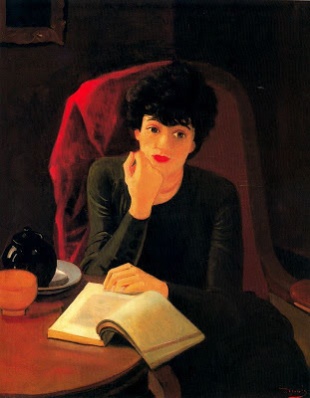 I have been reading about the power of introverts in a world that can’t stop talking. Here gregariousness is revered and is often a survival requisite in careers and building relationships. A talker triumphs over a listener. Everyone is always ‘preparing a face to meet the faces it meets‘. This pressure to sell oneself, the preference of personality over character, can be overwhelming for the introverts who want a little quiet and solitude in their lives, and yet don’t want to lose out opportunities to the hyperthymic extroverts.
One remains unaware of this anxiety in early childhood. I used to spend hours holed up in a nook reading my favorite comics, watched Sunday cartoons, sketched trees and rivers, while the rest of the children in the neighbourhood broke windows with cricket balls. My participation  in their games was quite enthusiastic, but when night fell I also needed to chase fireflies in our garden, oblivious to amused stares. Adolescence brings awareness of preferences for spending time alone or not being able to break in to conversations with ease. Introverts have a small group of  friends and engages in one-on-one conversations rather than be part of a rowdy, large bunch of friends at school/college. They prefer to blend into the crowd, cringing at any unwanted spotlight. It isn’t ‘social anxiety‘ or ‘inferiority complex‘ or ‘depression‘ as many helpful souls had termed it in an attempt to diagnose quietness. Introverts can be chatty, but only with people they are comfortable with. They don’t start blabbering in front of complete strangers in order to emphasize friendliness. None but my closest friends understand why I let calls go unanswered sometimes or spend nights in with a book and revel in some much needed solitude. It’s not a rude avoidance of any social contact, introverts just need their own space to recharge and dive in to do the things they love.
Introverts are a misunderstood lot and often pitied for their lack of voice. ‘She’s very shy‘, my father would offer as an explanation for my apparent disinterest in striking up a conversation at social events. He apologized for my quietness! I’m not shy. When it comes to standing up for what I believe in, when speaking my heart out or when voicing my opinion I have always been very forthright, even at the times when it is a boldness bordering on foolhardy courage. Introverts don’t elbow their voices into every conversation around them or boastfully state their opinion about matters they know little about. They are often assertive, they are just not into its loud exhibition.
Introverts have a million thoughts in their minds, but will tell them to you on a quiet evening over a cup of coffee, sitting cross-legged on the bed; they won’t announce these to mere accquaintances at a party. I am very fortunate that two of my closest friends are introverts too and I enjoy not having the compulsion to impress them, or constantly make sure that they don’t get bored; often we spend time quietly pursuing our own interests in companionable silence.
I don’t put down the ability to converse well and be comfortable in any social setting. That’s an enviable skill, and I regard its immense importance in this talkative world. I thank my stars that I chose a profession that has nothing to do with the corporate world where mostly extroverts flourish. I am there to treat patients, do my job quietly and efficiently, and that’s it. I am happy with this amiable one-on-one interactions. Even among physicians, I have seen smooth talkers, the gregarious ones being considered more skilled than the quiet, unassuming ones because of efficient marketing. But few of the best physicians who I have had the honour to meet were very humble and quiet. Once I met Dr. P. Dhingra, ENT surgeon, and his affable and serene aura invoked great reverence. This tiny old man wrote a book every MBBS undergraduate student in India reads!
If someone asks me what is it like to be an introvert, I would probably murmur a single word answer and escape. But you can see the paragraphs I have been going on and on about introverts, simply because it’s in writing. Introverts love to write. If it were not for us, the postal system would have gone extinct. We communicate better through the written word, simply due to the myriad observations finally finding an outlet, without interruptions and the need for approval. One just has to write.
I have had my periods of frustration and anxieties about the conscious effort it takes me to keep up with  social interactions. There had been times when I smiled and nodded my head so enthusiastically to show my rapt attention, I nearly dislodged a vertebrae. I had observed and applied the nuances of small talk, but there’s a lurking fear that others can detect its pretentiousness, that it is not my own preference, but a genuine attempt to blend in just for once. I did enjoy the fringe benefits when I slipped into my extroverted phases, mostly the laughter and the fun. But as I said earlier, I need some quiet time in between such phasesor I’ll collapse. Few of the introverts I know had adopted the same ploy of slipping into extroverted phases, and had enjoyed it enough to remain so, pumping their liberated fists in air! Adulthood had freed me from the need to fit in and more comfortable in accepting the way I am, which is in a minority of solitude-seekers, quietly and happily doing their own thing. I admire the verve of extroverts, but I don’t regret its lack in me.

Introverts all over the world are reminded at every step to be more voluble, get some chutzpah and radiate an almost blinding energy. But it’s a comfort to stay true to one’s self rather than act through life to be another specimen of ‘ideal‘ as deemed by society. So, walk slowly at times. Think. Observe. Lose yourself in what interests you, instead of multi-tasking. Stop. Breathe. Listen. Awaken your inner introvert for a day, and recharge. Be quiet.

I am thankful to Susan Cain for writing ‘Quiet‘. It’s a thump of approval, a comforting re-assurance, a pat on the back for the introverts, long awaited and much appreciated.
You’ve just read a post from ‘Dialect Of Heart’. Kindly consider leaving a comment.

This site uses Akismet to reduce spam. Learn how your comment data is processed.