Two decades ago I barged into a class and under the scrutiny of fifty pairs of eyes that had turned towards the door, I tripped and fell. I didn’t pause for a single second on the ground, and dashed towards my desk, trying to overlook the classmates who sniggered. And it was only when the teacher shrieked ‘Your socks are soaked with blood!’ I looked down at my bloodied knees. The wounds gaped wide enough to require sutures but I was too preoccupied with my embarrassment to feel even the slightest stab of pain. As everyone fussed over my injury, caressing my head, and offering me a glass of water, I felt the pain in my legs explode. That’s what I remember from that day. If you don’t dwell on it, the hurt is negligible. I took to suppression as a coping mechanism against injuries and setbacks; I don’t conceal or run away from hurt, but face it with an essential detachment, like events unfolding in the life of a close acquaintance where I have a ringside view of everything but I am spared the pain. I don’t dwell on the ground to look at my bleeding knees.
February was tough. I lost a sister, an important plan fell through, a close friend disintegrated into depression, and I witnessed (and still witnessing) a career-related legal drama. If I allow myself to take it in all, the chaos would choke me. But over the years, my mind had adapted to detach and distract itself from the dreams that crumble, the people I lose or the ennui of everyday existence, filing them away in neat little cabinets. Life is too short to mourn about what happened and what didn’t. I am yet to be loved; I am yet to achieve my goals. There are so many places I haven’t visited yet; there are so many books I haven’t read yet. I go from one day to the next, concentrating on what is and what would be. The past can’t be crammed into my life.
I extrude the unpleasant by replacing it with small moments of pleasure. A day after my elder sister died, I felt guilty about the happiness that bubbled up in my chest on seeing the new and vivid bougainvillea blossoms near my home. On the days when love disheartens me, I write about love. I read wherever and whenever possible. The calming monotony of laps in the pool or feet pacing on a long walk is something else that I look forward to. My ambition had blunted in the recent years, and I am trying to revive it; but all the while reminding myself that it is just a job. I am not one of those revoltingly joyous and perky individuals brimming with optimism, but I refuse to drown in despair too. Life is just normal; sometimes I create my own happiness, and sometimes it creeps in unexpected.
I take solace in the unusual; even the absent lover has a peculiar charm. It can sometimes morph into a constant and subtle longing for him to witness the world with me, to witness me, to let me witness him. These are the moments when I walk about interposing minutiae of my idea of him into the world around me, blending the two seamlessly. Today I drove to IITG and spent few delightful hours walking the large green grounds and catching up with old friends. All throughout I carried him around to hear that song on the car radio, to see that lone black bird on a tree with red blossoms, to be enthralled by that sunset over the vast river, to hear the conversations I had, or to laugh over my hair fanning out weirdly in the wind. Sometimes an intangible absence makes me feel more alive to the world than the tangible objects that crowd it.
You’ve just read a post from ‘Dialect Of Heart’. Kindly consider leaving a comment.
A bowl of crisps, rain outside my window, a soft bed and the cinematic pursuit of five nights.

The Color of Paradise (Iranian): A blind boy gifts his grandmother a green hair clip and she lovingly pins it onto her dress, the sisters accept a necklace made out of tin bottle caps and a comb; treasuring the gifts of love thoughtfully selected by one who couldn’t see them. Traipsing around the Iranian countryside, Mohammed’s life is colored by the same joys that occupy the lives of ten year olds. He wonders what lay beyond the forest he couldn’t see but knows is near. He is exasperated by the questionable reading skills of the boys of the local school. His fingers move fast across the notebook in Braille as a curious teacher looks on, and the same fingers study the rhythms of nature. He wonders what the birds talk about, and the call of the woodpecker fascinates him. He touches his sister’s face and is amazed at how much she has grown up in the past year. He adores his grandmother and craves his father’s acceptance and love. He has his moments of grief, breaking down the wall of joy and self-reliance he has created so painstakingly. He doesn’t expect much from this world, but his father does from him. The man’s insistence on a ‘normal’ life free of responsibilities of taking care of a blind child, and hopes of getting re-married bring about a slew of personal tragedies abruptly overthrowing the veiled paradise he inhabited but failed to recognize. It’s a cornerstone of cinematic excellence, yet the end left me in dismay. 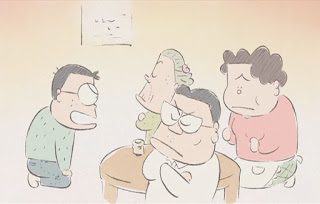 My Neighbours, the Yamadas (Japanese): Pimple-faced, overtly self-conscious and perpetually lazy teenager, Noboru, receives a phone call from a girl. Now, that’s a first in his life and also in the family’s collective set of events. Grandmother, mother and sister lives up to their uncontrollable levels of curiosity and eavesdrop shamelessly on the phone conversation.
Grandmother: “Does he have a girlfriend? With his looks?”
Mother: “A real girlfriend?”
Sister: “His face is red!”
Boy tackles the huddle of curious women with a few menacing glances, they cower away. He rushes back to his room.
Mother: “You insulted him, Mother!”
Grandmother: “And you are the paragon of motherhood!!”
The movie is filled with vignettes of the life of a middle-class family in Japan but rings true for families across the world. The panic of losing their little daughter in a crowded shopping mall, confronting hooligan bikers in their neighborhood, finding the black hole that shelters lost socks, the politics of deciding dinner menu, the fight over the television remote that can shame any Kung Fu enthusiast, the frisky and headstrong grandmother with a disposition for cooking unpronounceable dishes, the ever-frazzled and clumsy mother, the aimless and all knowing teenager, the smart sister, the dynamics of a ‘real’ marriage of a tough and harmonious couple; the movie chronicles what it is like to be a family, cruising on the same boat of Life, and not always steering in the same direction. Witty and endearing, this movie is a delight.

A Separation (Iranian): Sometimes it’s nobody’s fault, but circumstances need only a tiny shove to spiral into the bounds of no return. A dutiful son taking care of his Alzheimer-afflicted father, a wife who needs some fresh air out of a monotonous life, a precocious eleven year old daughter anxious about her parents imminent separation. And then there is the family of the caretaker who is hired to take care of the Alzheimer patient. There is a lapse of duty, a fit of anger, a scuffle and loss of the caretaker’s unborn child. There is anger, legal complications follow, love is tested, distrust ensues and facades fall as each person struggle to hold on to what they dearly love. And just when things settle down to an amiable decision, befitting all involved, mere words destroy it all,  unraveling what binds them together. It’s a slice of life movie with achingly real characters. Sometimes despite every effort, things fall apart. And we wish life wasn’t so complicated. And we wish communication was easy. And even compromise.

How to Make an American Quilt: She followed a crow’s flight at the wake of dawn, wrapped in a quilt to shield against the autumn chill, and true love awaited her at the end of it. Was the crow a symbol? I’m still working on that. Finn is flighty when it comes to completing her Masters thesis, and her boyfriend has just proposed. She accepts because it isn’t an unreasonable age to get married. She goes to live with her grandmother and grandaunt to work on her thesis, and encounters a motley bunch of quilt-makers who are all set to make her wedding quilt. And while Finn struggles with her ideas of the impermanence of marriage, monogamy and the charms of a local boy, the quilt-makers each bring their distinctive pattern into the quilt and the stories behind these quilt patches help Finn course her way through indecisiveness, infidelity and finding love. Six stories of love, loss, passion, tolerance, togetherness, trust and hope. It’s a pleasure to watch the lovely Winona Ryder, and Maya Angelou too (bibliophile hangover). I am always on the lookout for crows now, but where is a good crow when you want to follow one?

Where is the Friend’s Home? (Iranian): This movie is about a eight year old boy, Ahmed, who accidentally slips in his bench-mate’s copy in his bag and is traumatized by the thought of his bench-mate’s expulsion from school on failing to hand over the homework the next day. The film chronicles his search for his friend’s home in a nearby district and the people he encounters in his search. It is a simple story, nothing superfluous. And this lack of a crowded plot and interesting deviations can be a killjoy for a certain section of audience, but it’s a delight for my heart overflowing with the love for Iranian movies. One gets the feeling of running alongside Ahmed in his quest for his friend’s home. A lovely watch.
You’ve just read a post from ‘Dialect Of Heart’. Kindly consider leaving a comment.